The voyage of M. Charles Leigh, and diuers others to Cape Briton and the Isle of Ramea.

The thirteenth day we had sight of S. Peters Islands. And the foureteenth day being foggy and misty weather, while we made towards the land, we sent our shallop before the shippe to discouer dangers: but in the fogge, through the mens negligence which were in her, she lost vs: yet we kept on our course, thinking that although we could not see them, yet they might see our ship: and comming into sixteene fathoms water we cast anker, supposing our selues to be neere the shore: and in the euening it pleased God to giue vs for the space of one quarter of an houre clere weather, by which we found our selues to be imbayed, and also had sight of our shallop, which was at the point of a land about one league from vs. The same night we went further into the same bay, where we had very good riding. The fifteenth we went on shore, and in that place found footing of deere, and before we returned we killed one. 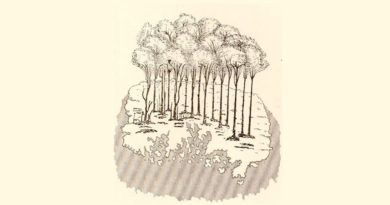