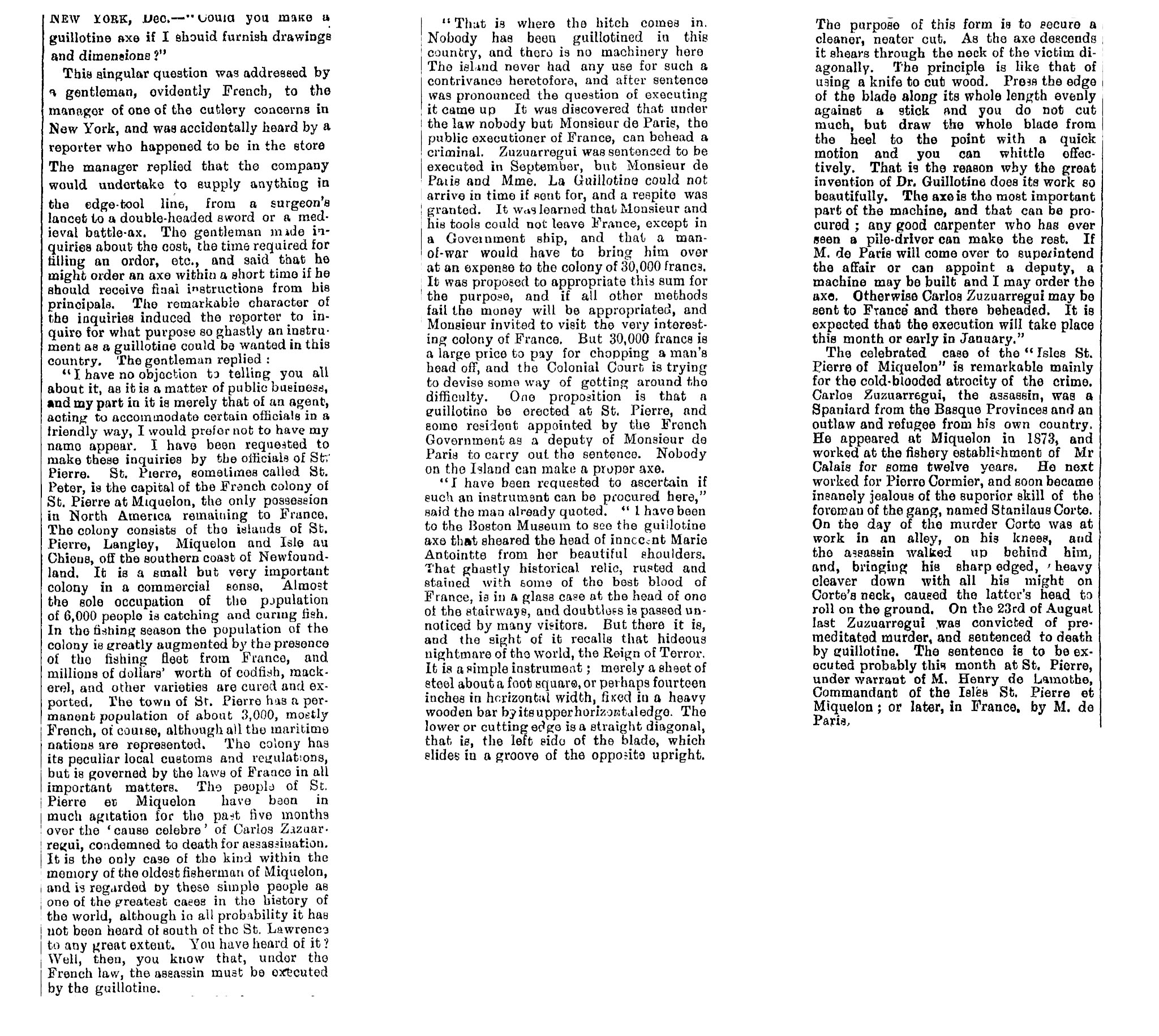 AN AX FOR A GUILLOTINE.

Shall an Executioner be Brought from Paris or the Murderer be Taken Across the Sea to be Beheaded? 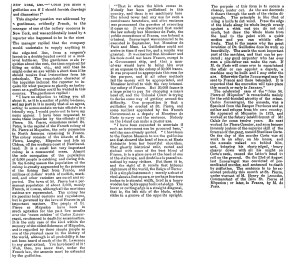 « Could you make a guillotine if I should furnish drawings « . This singular question was addressed by a gentleman, evidently French, to the manager of one of the largest cutlery concerns in New York, and was accidentally heard by a reporter who happened to be in the store. The manager replied that the company would undertake to supply anything in the edge tool line, from a surgeon’s lancet to a double-handed sword or a medieval battle-ax. The gentleman made inquiries about the cost, the time required for filling the order, etc., and said he might order an ax within a short time if he should receive final instructions from his principals. The remarkable character of the inquiries induced the reporter to inquire for what purpose so ghastly an instrument as a guillotine could be wanted in this country. The gentleman replied: « I have no objection to telling you all about it, as it is a matter of public business; but as my part in it is merely that of an agent, acting to accommodate certain officials in a friendly way, I would prefer not to have my name appear. I have been requested to make these inquiries by the officials of St. Pierre.

St. Pierre, sometimes called St. Peter’s, is the capital of the French colony of St. Pierre et Miquelon, the only possession in North America remaining to France. The colony consists of the islands of St. Pierre, Langley, Miquelon and Isle aux Chiens, off the southern coast of Newfoundland. It is a small but very important colony in a commercial sense. Almost the sole occupation of the population of 3000 people is catching and curing fish. By some ancient treaty the colony has certain fishing privileges on the Newfoundland coast and banks, which causes more or less ill feeling between the people of St. Pierre and Newfoundland Is.

The fishing season the population of the colony is greatly augmented by the presence of the fishing fleet from France, and millions of dollars worth of codfish, mackerel and other varieties are cured and ex ported. The town of St. Pierre has a permanent population of about 3000, mostly French, of course, although all the maritime nations are represented. It is a quaint town, built wholly of stone, and being so far from any populous country the people are simple and unsophisticated. They are all good Catholics, and the island of St. Pierre has its convent. These facts give you something of an idea of the character of the colony and its inhabitants. They have their peculiar local customs and regulations, but are governed by the laws of France in all important matters. The little colony of Pierre et Miquelon has been in much agitation for the past live months over the « cause celebre » of Carlos Zuzuaregui, condemned to death for assassination. It is the only case of the kind within the memory of the oldest fishermen of Miquelon, and is regarded by those simple people as one of the greatest cases in the history of the world, although in all probability it has not been heard of south of the St. Lawrence to any great extent. You have heard of it? Well, then, you know that under the French law the assassin must be executed by the guillotine. That is where the hitch comes in. Nobody has ever been guillotined in this country, and there is no machine here. The islands never have had any use for such a contrivance heretofore, and after sentence was pronounced, the question of executing it came up. It was discovered that under the law nobody but Monsieur de Paris, the public executioner of France, can behead a criminal. Zuzuaregui was sentenced to be executed in September, but Monsieur de Paris and Madame la Guillotine could not arrive in time, if sent for, and a respite was granted. It was learned that Monsieur and his tools could not leave France except in a government ship, and that a man-of war would have to bring him over at an expense to the colony of France. It was proposed to appropriate this sum for the purpose, and if all other methods fail, the money will be appropriated and Monsieur invited to visit the very interesting colony of France. But 80.000 [30.000? ndlr] francs is a large price to pay for chopping a man’s head off, and the colonial courts trying to devise some way of getting around the difficulty. One proposition is that a guillotine be erected at St. Pierre and some resident appointed by the French government a deputy of Monsieur de Paris to carry out the sentence. Nobody on the islands can make a proper ax. I have been requested to ascertain if such an instrument can be procured said the man already quoted. « I have been to the Boston museum to see the guillotine ax that sheared the head of innocent Marie Antoinette from her beautiful shoulders ». That ghastly historical relic, rusted and stained with some of the best blood of France, is in a glass case at the head of one of the stairways, and she is passed unnoticed by many visitors. But there it is and the sight of it recalls that hideous nightmare of the world, the reign of terror. It Is a simple instrument; merely a sheet of steel about a foot square, or perhaps fourteen inches in horizontal width, in a heavy wooden bar by its upper horizontal edge. The lower or cutting edge is a straight diagonal, that is, the left side of the blade, which slides in a groove of the guillotine frame, is three or four inches shorter than the right side, which fits the groove of the opposite upright. The purpose of this form is to secure a cleaner, neater cut. As the ax descends it shears through the neck of the victim diagonally. The principle is like that of using a knife to cut wood. Press the edge of the blade along its whole length evenly against a stick and you do not cut much, but draw the blade from the heel to point with a quick motion and you can whittle it effectively. That is why the great invention of Dr. Guillotin does its work so beautifully. The ax is the most important part of the machine, and, it that can be procured, any good carpenter who has ever seen a pile-driver can make the rest. Monsieur de Paris will come over to tend the affair, or can appoint a deputy, a machine may be built and I may order the ax. Otherwise Carlos Zuzuaregui may be sent to France and there beheaded. It is expected that the execution will take place this month or early in January. »

The celebrated case of the Isles Saint Pierre et Miquelon is remarkable mainly for the cold-blooded atrocity of the crime end the total absence of provocation. Carlos Zuzuarregui, the assassin, is a Spaniard from the Basque provinces, and a very bad specimen of a peculiarly bad race. The Basques are such incorrigible depredators and brigands that three prefects of police ere required in a district containing no more people than are controlled by one prefect in other provinces. They are a turbulent, sullen, lawless lot, and notoriously handy with his knife. Zuzuaregui is typical Basque and outlaw and a refugee from his native country. He fled from Europe to escape punishment for numerous crimes, and it was supposed that a murder was his last achievement at home.