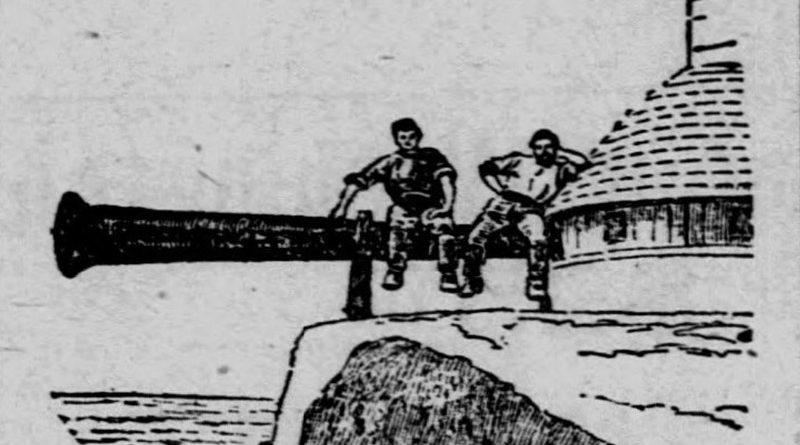 At dawn we saw the highlands of Miquelon rising out of the sea before as, and presently we raised the little Island of St. -Pierre. Then, running before a brisk easterly breeze, we swung by lie aux Chiens, swept up the road-stead, where a couple of stately men of war lay at their moorings, and entering –a snug harbor. rounded to and came to anchor amongst a crowd of miscellaneous craft from various quarters of the world lumbering old barks, ancient brigs,, dapper little tern-schooners, trim, smart looking fore-and-afters from Gloucester and Lunenburg, and scores of smaller fishing boats.

The town of St. Pierre is situated on an Island of the same name, having an area of only nine square miles. Its settled population is less than 4,000, but being the base of the French fisheries, its population during the summer Is augmented by about 6,000 fishermen from France. Its harbor is accessible to the largest ships, but is not very well sheltered from northeast storms. The Islands of St. Pierre and Miquelon have a united area of Fog Whistle on Miquelon. about ninety-three square miles. Miquelon consists of Greater and Lesser Miquelon formerly separate islands, but now united by a sandbar. All these islands are mere rugged masses of granite, and at several points are over 600 feet high. A thin covering of soil is found in some places, but agriculture does not extend beyond vegetable gardens. In 1898, the settled population of all the islands was 4,700, of whom 1,611 were men, 1,494 women, and 1,595 children.

To France, her St. Pierre possessions, situated as they are in a great trade highway, have immense strategic importance as a possible basis for commerce destroying operations, as well as being valuable as a fishing de pot, and a nursery for her navy; and if she parts with t r jm at all, it will only be for valuable considerations.

St. Pierre has long been the center of a well organized smuggling traffic, and,- though the vigilance of the customs authorities of Canada and the United States has done much to check it of late years, a large contraband business is still carried on.

The following story told by a sea captain, who was a few years ago in command of a Canadian revenue and fishery protection emitter, illustrates the audacity and resource of these contrabandists. The cutter, a smart sailing schooner, was then stationed at Souris, a port at the eastern end of A Lobster Fisherman of Miquelon. Prince Edward Island. One day the captain received word from a secret agent in -St. Pierre that a notorious smuggler had openly boasted that he would land a cargo of liquor In Souris the following night, despite all the cutters in Canada. The captain gave out that he had been ordered to the south shore of Nova Scotia,-and next morning, bright and early, got under way and -stood over towards the Gut of Canso »-till he had run the island out of sight behind him. Then, after making a traverse towards Cape Breton, he put out his long boat, to make warn the cutter look like a seiner, scores of which were cruising about the North Bay, and stood back to East Point. Along in the afternoon two pinks appeared coming down from the northeast, but when about five miles to windward off the cutter, they hove to and started to fish.

« That green fellow is the lad we’re looking for, » declared the captain, jubilantly. « The other the black lad Is the one that was in Souris when we left this morning. Under the impression that we were going through the Gut, he’s met the smuggler up to windward and told him the coast was clear. »

The cutter’ began to make leisurely tacks towards the pinks, but presently the green lad crowded on sail and stood away close-hauled to the north east. The cutter gave chase, and in an hour or so overhauled and boarded her only to find an inoffensive fisher man. Then » the captain bethought him of the black pink, and looking to lee ward, saw her bear away and run down the coast, evidently intent on getting in among the islands above Georgetown by dark.

“Hang it! This fellow’s led us a wild goose chase,” said the captain. “They’ve transshipped the stuff. Up helm and wing her out. We’ll catch the rascals yet.”

The cutter stood after the flying black pink, and a while before sun down came in hail of her. The pink paid no attention to the order to heave to.

The cutter swooped down upon the little jink [pink?], but still she paid no heed. And when at last the cutter swerved aside to pass her. The pink yawed the same way, and next moment the cutter’s big main boom swept the pink’s spars out of her as if they had been pipe stems. The cutter sends a boat aboard of her, but the pink carried no contraband goods, so the cutter, having dismasted the chase, had to take her in tow and beat back to Souris. And you may imagine the captain’s feelings weren’t improved by what the crew of the pink said about his seamanship and the action for damages they proposed to take against him. As the cutter, with her tow. The Canadian fishing boat lands it at a proper time and place near the home port. » came to anchor in Souris, the green pink came round the breakwater and passed in to her whalf. “Hello, Cap, got a prize, hey? Smuggler, eh?” hailed her skipper. “If I come aboard by-and-by will you give me a drink ol gin?”

At that moment the green pink had a first-class cargo of St. Pierre liquor in her hold. While the cutter had been following her second wildgoose chase, she had kept on to windward, met the smuggler from St. Pierre,, thrown out her ballast, and taken in liquors in its stead. Of course the cutter, having searched her once that day, was not suspicious. And that night the audacious pink discharged her contraband cargo within two hundred yards of where the cutter lay, without trouble. A few years after the captain heard how he had been duped, but he wasn’t interested in suppressing the smuggling traffic then.

A pink (French – pinque) is a sailing ship with a very narrow stern.